19 June Virtual Tour Invitation:  No Remorse by Ian Walkley   Goddess Fish Promotions is organizing a virtual blurb blitz book tour for No Remorse by Ian Walkley, a action/thriller available now from Marq Books. The tour will run June 18 - 22, 2012 and we are hosting it on 19 June. we are looking forward to a good chat and exchanging views with this great author.HOPE TO SEE YOU THERE.


SO THE DAY HAS FINALLY ARRIVED CHECK OUT THIS EXCITING NOVEL HERE! 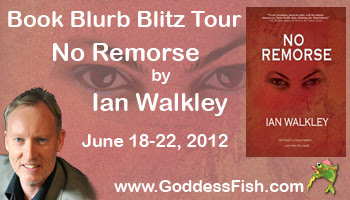 Two men, exiles from their respective societies, take conflicting approaches in the quest to regain their place and self-respect, and find themselves at war over a kidnapped girl.

Lee McCloud (“Mac”), a special forces soldier facing trumped-up charges of murder, is forced to work for a mysterious government outfit operating outside the law.

Khalid Yubani, cast out of Saudi Arabia for an offence against another member of the Royal family, seeks revenge through ruthless acts of evil. Engaged in the worst forms of human trafficking, Khalid buys Sophia, the daughter of Mac’s best friend, who has been kidnapped in Mexico. With time running out for Sophia, Mac enlists the help of a beautiful computer genius, a British SAS soldier and a Lebanese fixer to try to find Sophia and save her from the terrifying fate that Khalid has in store.

Although starting the quest as a man with no remorse, Mac gradually discovers a side of himself that he suppressed after witnessing the abduction of his own sister years before.

Dodging assassins, corrupt generals, evil medicos, Mossad agents, corrupt bureaucrats, and sharks, Mac ignores the order to stay out of trouble and follows Sophia’s trail from Mexico to Paris, London and Dubai, and the island of Andaran, where Khalid and his henchmen are waiting…

EXCERT FROM THE NOVEL

The girls’ fathers, Bob and Marvin, each carried a briefcase full of cash with a tiny GPS tracker hidden in a false bottom. They were both taller than the kidnappers, and through the scope Mac could read the pain on Bob’s face. The behavior of the kidnappers was still bothering him, but there was nothing he could do except watch. The leader held out his palm and waved his pistol like it was a flag. He addressed the fathers in accented English.


“You’re late. We think perhaps you do not want your daughters back, eh?”


“Sorry,” Bob said, his breathing short and sharp. “We took a wrong turn coming into the dam. The signs were confusing.”


The man grunted and glanced at the one with the knife. “Check them.”


Knife Man patted them down, searched their pockets, nodded the all clear.


“Of course.” Bob’s voice came through deep and confident in his earpiece, although the armpits of his shirt betrayed his anxiety. Be courteous but strong, Mac had advised him, otherwise they won’t respect you. Being a basketball coach undoubtedly helped. “And you have our daughters,” Bob said. A statement, not a question. He held out the briefcase. “Here’s the money. We didn’t contact the police.”

Ian Walkley has had a career in social and market research, and has been writing novels, short stories, travel articles and copywriting since 2008. He has co-authored two publications on small business and his first novel, No Remorse, was published in 2012. Ian's screenplay "Deniable Justice" placed fourth in the Writer’s Digest 2011 Competition for best screenplay. Ian has travelled extensively and researched his subject, and brings a knowledge of location and technical detail to the exotic settings and big screen thrills. Ian lives in Brisbane with his wife and three children.
LINKS
http://www.ianwalkley.com
http://www.facebook.com/ianwalkleyauthor
http://www.twitter.com/ianjwalkley

MY REVIEW - BY DECLAN MUNRO

No Remorse is set in a sort of Ian Fleming concoction of the Middle East, Europe and the USA. Lee `Mac' McCloud, takes you on a high action thrill ride that leads you into a world of terror, mystery and romance. The main character Mac is on a mission to rescue his pal's daughter who has been abducted by human traffickers. It is familiar territory but that is the point.  Think 'Taken' the movie. It is genre fiction in that sense. The book is a great page turner and there is plenty of excitement to keep the pace moving.
Is it a blokey book? Depends on your view? Certainly there is violence, some sexual scenes which might avert the sensitive and it is not for the easily offended or politically correct. But then neither is say a writer like Fleming. It is just fast paced story telling and any nationality could be the baddy; point being there are goodies and baddies. With plenty in store as a page turner and a neat ending.
.
One for a quick read as if you were watching the movie. I felt the best way to view this book was not to be judgemental, it is what it is, I did not try to read too much into it anymore than I did when I watched the film Taken with Liam Neeson kicking butt.

I give it a hearty four stars. It is not high art, nor does it bear too much analysis. Enjoy it for what it is and it is a stonking good read. ****